_Summary | The FUTURA without stability 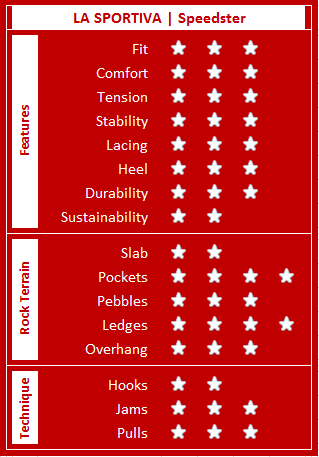 To  be honest the heading is probably a bit of a harsh judgement but in the essence kind of true. The SPEEDSTER is indeed based on the same design as the FUTURA, but given the fact it’s a ballerina/slipper it lacks the added stability that the velcro gives its bigger brother. I cannot support some of the other testers coming to the conclusion that this is one of the most aggressive ballerinas ever made. In the contrary I think it’s a relatively tame version of a slipper, the problem is that even if you buy it tight, it lacks in stability what it tries to make up for in aggressive form. At least for me the compromise doesn’t add up. In addition it has the same design drawbacks as the FUTURA, particularly the lacking sustainability due to the ‘edgeless’ sole design. On the upside though the SPEEDSTER is relatively ‘cheap’ compared to the nearly 50€ thus 50% more expensive bigger brother. So if you can forgo the additional stability of a velcro or a lacing, and don’t want to spend ridiculous amounts of money on a climbing shoe, the SPEEDSTER is a decent alternative.