Kalymnos or “how to climb the Aegean” 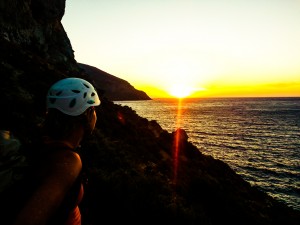 If you consider yourself a climber, no matter where on this planet, Kalymnos and its abundant high-quality climbs need to be visited at least once in your life. Perfect rocks, well protected routes, abundant sun, beaches and clear water… that and a lot more is Kalymnos/Telendos in the Greak Aegean, just off the coast of Turkey.

Here’s a little how to, from travelling there to what are the best spots…

How to get to Kalymnos (Google Maps with locations)

There are several option to get there. The most favourable and fastest one is via plane and ferry, the alternative via car and ferry is not to be recommended, cost and timewise.

Telendos | View to Telendos from Symplegades sector above Myrties (in the foreground) & the jetty with ferries crossing over to Telendos.

What’s the difference? Well, worlds are the difference. Kalymnos is noisy, used to have its hey-day in the 80ties, lacking a certain style, or any for that matter (before you object: I’m talking about Myrties mainly). The main place to stay on Kalymnos and the closest to most of the sectors is Myrties. An alternative is Arginonta, with a very limited selection of flats and everything only close to the main street. Another is Emporios at the north coast of Kalymnos, but very far from most of the sectors. However the north is currently under development and new sectors keep popping up. Also the road to Palionisos Bay is very close, which could be an advantage if you like chilling at the by far nicest beach on Kalymnos. 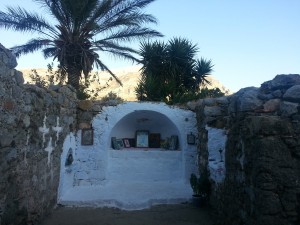 If you plan to combine climbing and swimming you need to consider Telendos. Reachable only via boat from Myrties harbor. Telendos is the small sister Island, that used to be connected to Kalymnos until the 6th century when several earthquakes obviously separated the two. The many early christian buildings (baths, churches, etc.) on Telendos still tell a lot about the common history. As of today less than 70 people live on Telendos, and only during summer/autumn. In winter the island is practically empty. This said, the island still is still feeling in a lot of ways like the 6th century island. No streets, no cars, just a bunch of restaurants across the coast and some very narrow walkways behind the waterfront. The rest is  massive rock, blue sea, and quiet suroundings. And good food of course.

So this explains what you need to consider if you pounder where to stay. Civilization vs. quietness, fast access to the climbing sectors vs. an additional 30-45 minutes every morning, depending on where you stay on Telendos and if the ferries are on time (they never are, well, we are on Greek Maybe Time anyhow) and of course the 2€ one way vs. none of them.

Potential places in the order I prefer them:

I would not recommend to stay on Kalymnos (Myrthies or Massouri), we might have just had bad luck, or a bad day, but when we tried it we were greeted by an army of cockroaches. If you need to stay there because Telendos is booked out, try the following:

In general the food on Kalymnos and Telendos is good to very decent, but after a week it can get pretty boring, try to stick with restaurants where you see what they offer = fresh fish or fresh kalamari. Chicken is almost never fresh, neither is tuna or any game fish. Hare and goat is mostly fresh, depending on the location. On Telendos simply ask the owners what was the catch of the day and let them show you, they are usually very accomodating and love to tell you the story around the catch. With Kalamari you can seldom go wrong, same applies to Moussaka, although the tastes vary widely between the different family recipies. The one in Arginonta is especially delicious, the same is true for the taverna in Palionissos which is by far the best on Kalymnos.

On Kalymnos just try the most popular ones, either the ones on the main street in Massouri, or one of our favorites, the one in Arginontas, on the left side next the beach before the village ends (right opposite to the sharp right turn that would take you on the new street to Vathi). Our biggest favorite is the small taverna on the left side of the fjord of Palionissos. Amazing view, the best in the Dodecanes and great food, plus the best beach on Kalymnos or Telendos.

Where to climb and swim

The best places to combine swimming and climbing are PALIONISSOS and KASTELLI and of course the Telendian Sectors behind IROX. All the other sectors require more effort to either get from the rocks to the beaches or vice versa. In general always check http://climbkalymnos.com/ first before you head out for the rocks. Updated route lists and most recent infos on the cracks are up within days. The most reliable source for any climber. 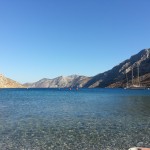 Palionissos | Beach view into the fjord 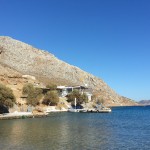 Palionissos | Fjord left side with Taverna 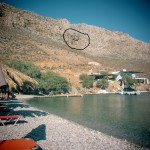 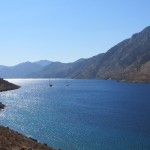 Palionissos | View into the Fjord from Sector

PALIONISSOS is a relatively new sector in the north-west of Kalymnos. It used to be a remote beach with just 2 houses and now in 2013 there is already a score of them an a real settlement evolving. Can’t say I like this development, but it was bound to happen, especially as this is by far the most serene place on Kalymnos. Forget Vathy (really ugly) and go here instead. An impressive fjord and an amazingly clear and formerly also calm pebble beach. This year it was already pretty crowded and some idiot set up a kind of shed right behind the beach selling crap and tourist food. But that’s obviously the way everything goes on Kalymnos. Everything beautiful is hammered into pieces. 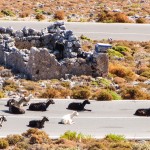 Formerly you could not really reach that part of the island, but with sufficient money from the EU pouring in, the Kalymnians build a sweet road with amazing views that winds through the rocks. The rock there is amazingly sharp. The routes either slabs (the easy ones) or stiff face climbing to the left, barely overhanging. The quality is as usual with new sectors  a bit sketchy, but gets better every year. The rock itself is perfect: sharp, really sharp and with a great grip. Also make sure you check the bolts on the top. Usually it’s 2 plus rings, but make sure they are not loose. This place is perfect on a cooler day, as it is virtually in the sun the whole day. We also have been there in late summer and it was ok, if you go easy and take enough water with you. The approach takes 20min and I would not recommend it with kids (also because the sector is new and the occasional rock comes down). For beginners particularly the right side is rewarding. Additional information can be found here (Climb Kalymnos) or here (30feethigh.tumblr)… 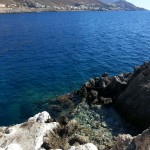 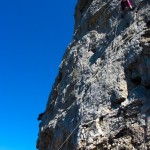 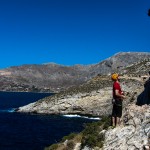 A lot has been written about KASTELLI elsewhere, so here just the VIP details:

This is something for the special taste. Possible in the evening or early in the morning, and only at quiet days. If it is too windy the sea reaches up to the 10 lower routes, which are in my view the best in the sector. As with KASTELLI in DOLPHIN BAY there are no hard routes and the 6th French grade is dominant here, but nevertheless a good sector to cool down or to warm up in the morning. 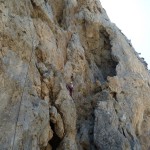 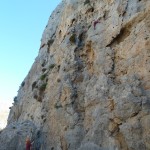 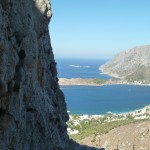 For us one of the  most sentimental spots on Kalymnos. This was the first spot we visited 8 or so years ago. The setting is pretty impressive high above Myrthies and Massouri with a stunning view of Telendoes through the two gates that form the sector. 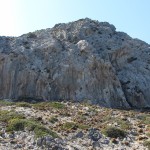 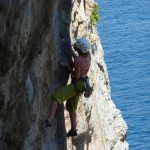 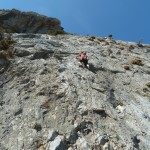 The fabled (at least 6 years ago) sector on Telendos and the starting point for making Telendos a 2nd Kalymnos. Initially set up by Urs Odermatt and Peter Keller, the sector was just the beginning of a sector explosion that started around 6 years ago. Nowadays IROX is still a popular destination, although there is abundant room and new sectors right around the corner. The good thing about Irox is that you can easily combine climbing and a quick plunge into the cristal clear Mediteranean! So bring your swimsuit. I shouldn’t say much about this one either, as it’s already a classic: 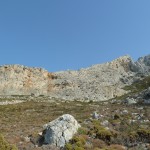 Lambda | View down to the landing place 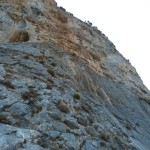 The newest and the sector farthest away from the settlement on Telendos. Again the work of Urs Odermatt, this time I think with Markus Leippold (for more info check the Klettern magazine issue July/August 2012). But the most impressive sector. Route length average is 40m, so bring an 80m rope or stay at home. A detailed review from myself can be found here: 30feethigh.tumblr.com. 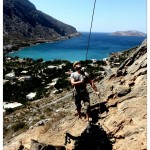 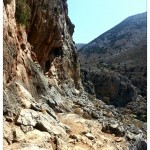 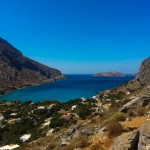 Just above the little village with the same name are several of the best climbing sectors on Kalymnos. It is divided in currently 5 subsectors. All with consistently great rock and very varied climbing. 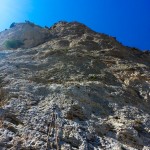 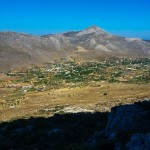 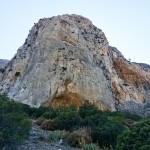 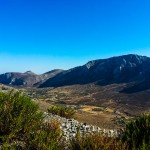 For me the absolute best on Kalymnos. For two reasons: One of the longest access walks (the times in the guidebook are complete bullshit, if you make it below an hour you are lucky). Absolutely isolated, long drive, and always blessed with a massive wind that starts around noon.

That’s it regarding my favorites on Kalymnos. I left out the classical spots high above Masouri and Armeos as I simply don’t like their setting and because they are usually much more crowded than the above mentioned. But in the end it’s all personal style. The hardest routes are in other locations than the ones described here. Follow these instructions for a relaxed holiday between the sea and the rock. Hardmovers, please look elsewhere (climbkalymnos.com).